Can I get a mulligan? 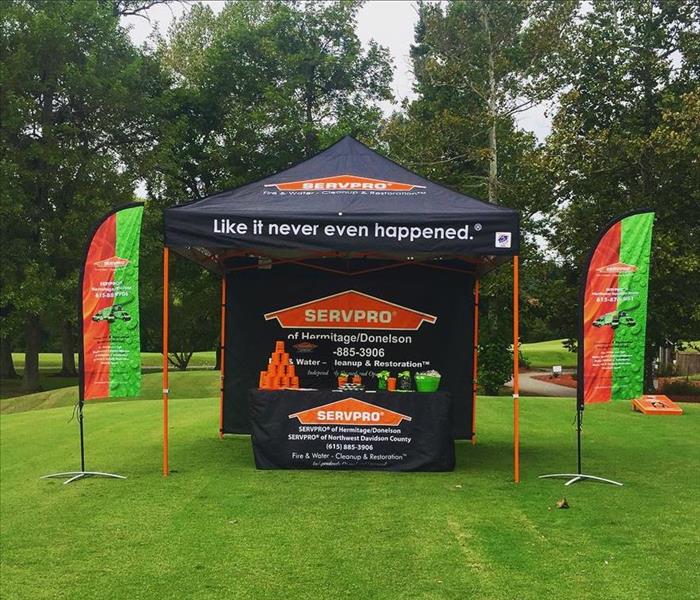 Thank you to the Donelson Hermitage Chamber of Commerce for throwing another fun and exciting Golf Tournament. We appreciate all that the members of the chamber do for the community of Donelson and Hermitage.

Though we did not win, we definitely had great fun and were able to do some great networking. We were set up on the 16th hole and supplied the players with drinks and mid-course snacks. For ones that were waiting to tee off, we played a competitive corn hole game for prizes. We have SERVPRO tees, divot tools, and ball markers that we give out every year so make sure to stop by and grab your supplies next time!

We are looking forward to next year's golf tournament and we're coming to take home the gold! 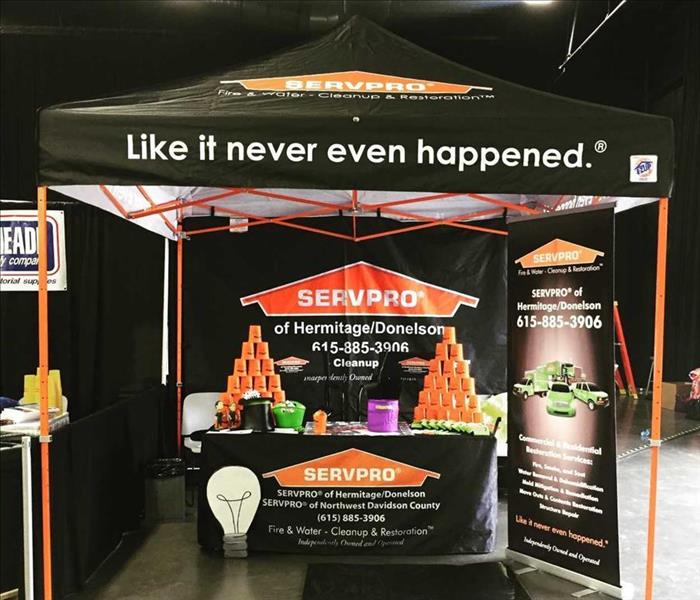 All set up and ready to go.

The Greater Nashville Apartment Association put on ANOTHER great trade show this year. SERVPRO of Hermitage/Donelson was very excited to be a vendor that was able to attend this event. We met some great people and are hopeful to be able to help our contacts in the future! The trade show is an event where vendors, apartment managers, and property managers gather for some after work fun and networking. Our booth handed out some SERVPRO swag to our game winners and a fantastic raffle prize! We hope that if you have a chance to attend this event in the future that you are sure to stop by our booth! This has become an annual event for our franchise and something that we look forward to all year! Thank you GNAA for all that you do! 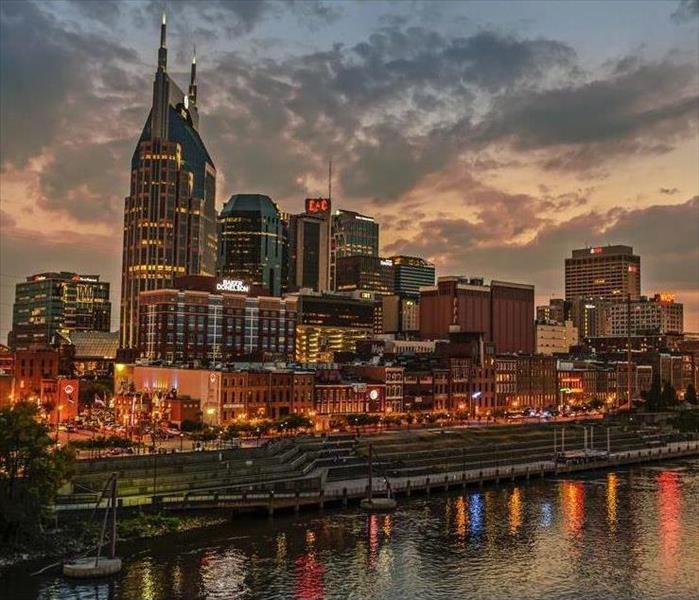 The town of Nashville was founded by James Robertson, John Donelson, and a party of Overmountain Men in 1779, near the original Cumberland settlement of Fort Nashborough. It was named for Francis Nash, the American Revolutionary War hero. Nashville quickly grew because of its strategic location, accessibility as a port on the Cumberland River, a tributary of the Ohio River; and its later status as a major railroad center. By 1800, the city had 345 residents, including 136 enslaved African Americans and 14 free African American residents. In 1806, Nashville was incorporated as a city and became the county seat of Davidson County, Tennessee. In 1843, the city was named the permanent capital of the state of Tennessee.

In February 1862, Nashville became the first state capital to fall to Union troops. The state was occupied by Union troops for the duration of the war. The Battle of Nashville (December 15–16, 1864) was a significant Union victory and perhaps the most decisive tactical victory gained by either side in the war; it was also the war's final major military action, in which Tennessee regiments played a large part on both sides of the battle.

In 1963, Nashville consolidated its government with Davidson County, forming a metropolitan government. The membership on the Metro Council, the legislative body, was increased from 21 to 40 seats. Of these, five members are elected at-large and 35 are elected from single-member districts, each to serve a term of four years.

Since the 1970s, the city and county have undergone tremendous growth, particularly during the economic boom of the 1990s under the leadership of then-Mayor and later-Tennessee Governor, Phil Bredesen. Making urban renewal a priority, Bredesen fostered the construction or renovation of several city landmarks, including the Country Music Hall of Fame and Museum, the downtown Nashville Public Library, the Bridgestone Arena, and Nissan Stadium.

Nissan Stadium (formerly Adelphia Coliseum and LP Field) was built after the National Football League's (NFL) Houston Oilers agreed to move to the city in 1995. The NFL team debuted in Nashville in 1998 at Vanderbilt Stadium, and Nissan Stadium opened in the summer of 1999. The Oilers changed their name to the Tennessee Titans and finished the season with the Music City Miracle and a close Super Bowl game. The St. Louis Rams won in the last play of the game.

In 1997, Nashville was awarded a National Hockey League expansion team; this was named the Nashville Predators. Since the 2003–04 season, the Predators have made the playoffs in all but three seasons. In 2017, they made the Stanley Cup Finals for the first time in franchise history, but ultimately fell to the Pittsburgh Penguins, 4 games to 2, in the best-of-seven series.

In March 2012, a Gallup poll ranked Nashville in the top five regions for job growth. In 2013, Nashville was described as "Nowville" and "It City" by GQ, Forbes, and The New York Times.

Ready For Whatever Happens 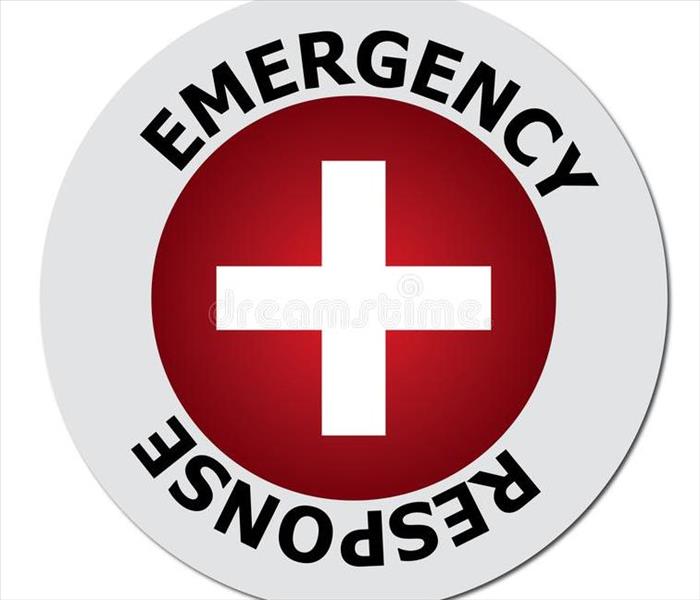 Pretty sure you have seen the commercials about being prepared. “When Disasters Strike”, well it is true! When a disaster strikes are you and your family prepared? Here are few helpful hints and tips from our family to yours to aid in limiting the losses you take.

1st Step is preparing a plan and discussing the 4 areas of that plan with your family and possibly your friends and neighbors.

2nd Step is to consider the specific needs of your household.

What needs are there within your household. A few of those to consider are:

3rd Step is to create a Family Emergency Plan. There are several printable forms on the internet that can assist with the framework of that.

4th Step is to practice that plan with your family at least once a month or every other month. The more it is known by all, the easier it will be to execute when the time comes. 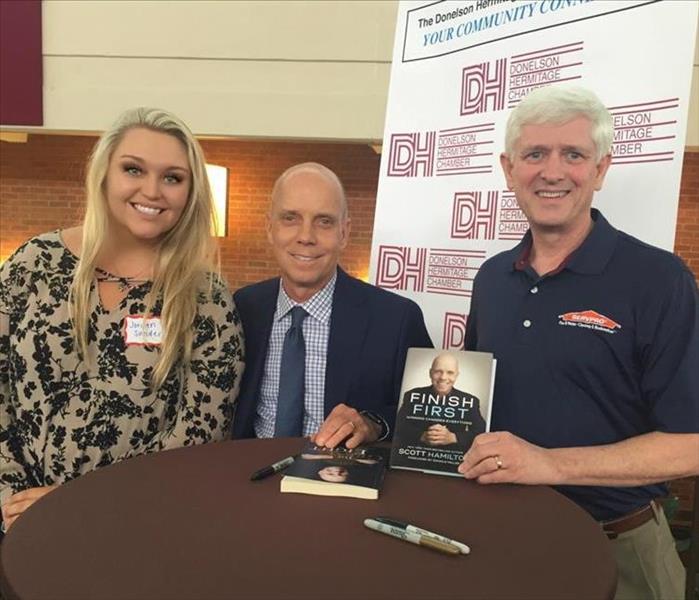 Olympic Gold Medalist and retired American figure skater, Scott Hamilton, was the must-see person at the Donelson Hermitage Chamber of Commerce Luncheon this month! Having spent time talking one-on-one with him, we can vouch that he is a very genuine and down-to-Earth person who cares a lot about the people that he comes into contact with.

In his address to the members of the Chamber, he talked about his battle with testicular cancer, his experience with his brain tumor and the steps that he has made to help the people that are affected by cancer.

He has a foundation called CARES and that stands for Cancer Alliance for Research, Education, and Survivorship. The main purpose of this foundation is to create different, less harmful ways to treat cancer patients including Immunotherapy and Proton Therapy which you can learn more about on his website.

He also started the 4th Angel Program. After recovering himself, he identified his three angels through his battle. The first angel: his oncology physician. The second angel: his oncology nurse. The third angel: his family and his friends. He said what he needed was a fourth angel: someone who had "been there, done that". This program is set up to pair someone that is going through their journey with cancer and match them up with someone who is close in age and had a similar cancer experience. This gives the patient someone that he/she can relate to and maintain that one-on-one relationship with to help them through a very difficult time.

SERVPRO of Hermitage/Donelson cares a great deal about the steps that Mr. Hamilton has made in the cancer field, because we, much like millions of others, know first-hand how cancer can affect the ones that you love and care about.

His website also includes a link in case there is any desire to donate to the CARES program to further the production of cancer killing treatments. 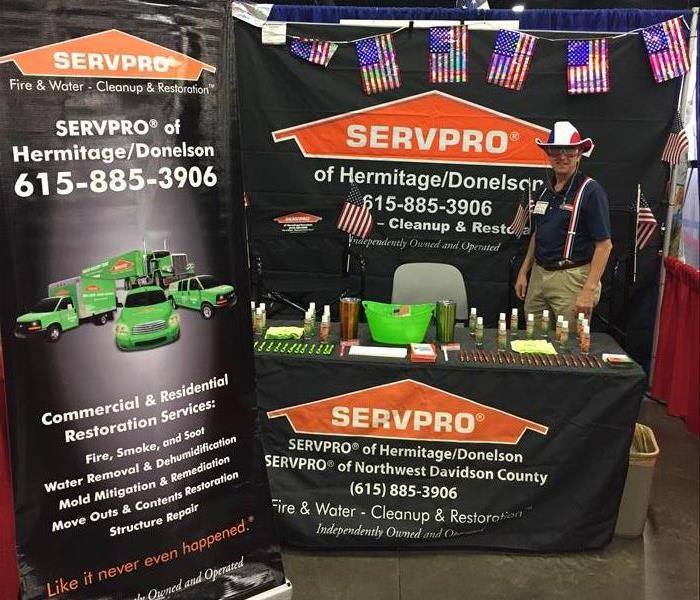 We were thrilled to be a part of another great trade show with the Greater Nashville Apartment Association. We even got our owner, Bob Jacobs, out in some spirited clothing. The theme was "Red, White, and Blue." As you can see by the photo, we take our themes seriously, but still want to be ready for whatever happens. Like a modern day Clark Kent, Bob could easily rid himself of his red, white and blue disguise to respond to a property related emergency.

We love any opportunity to get out for a night of fun with friends, customers, and industry partners. Even if it means we are wearing weird suspenders! See you next year at the GNAA Trade Show.

We Stand With The Nashville Predators 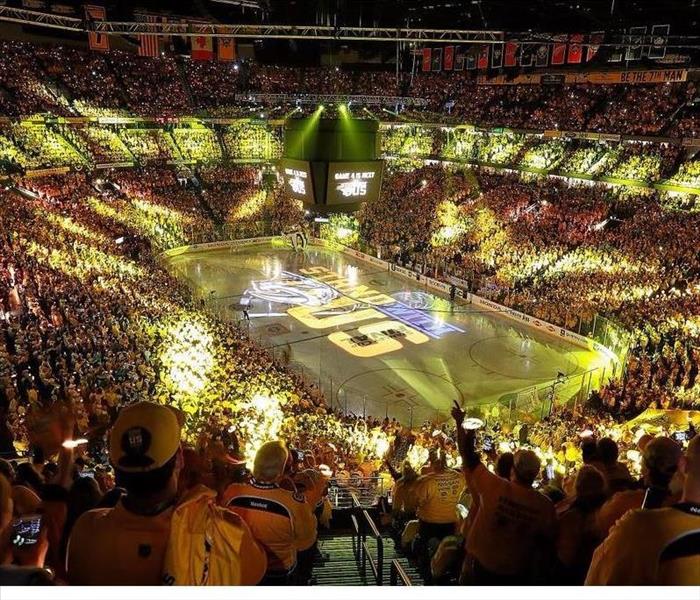 As the rest of the country seems to have fallen in love with our likable underdogs, we decided it was fitting to formally announce that SERVPRO of Hermitage/Donelson stands with the Nashville Predators. Their historic run for the Stanley Cup has not only brought much deserved attention to Nashville's hockey team, but it has also solidified Nashville as one of the greatest sports atmospheres in the country. We are proud to say that our office is just a short two and a half miles away from Bridgestone Arena, the home of the Predators. As you are cheering on the Preds in these Stanley Cup Finals, remember as the Predators are cleaning up around the net, SERVPRO of Hermitage/Donelson is here to clean up around your home after your celebrations.